Lipids are essential metabolites that have many crucial cellular functions and can provide a direct readout of cellular metabolic status. The total lipid content in a cell is called a lipidome. Lipidomics is the study of lipidomes using the principles and techniques of analytical chemistry, and emerged in 2003 as an approach to study the metabolism of the cellular lipidome.The analytical power of, and new developments in, mass spectrometry (MS) have accelerated this emerging discipline.

Lipidomics enables us to study cellular metabolism by quantifying the changes of individual lipid classes, subclasses and molecular species that reflect metabolic differences. As the pathways and networks of lipid metabolism have been extensively studied, any changes in lipid amounts can simultaneously reveal variations in several enzymatic levels, activities and/or gene expression patterns. 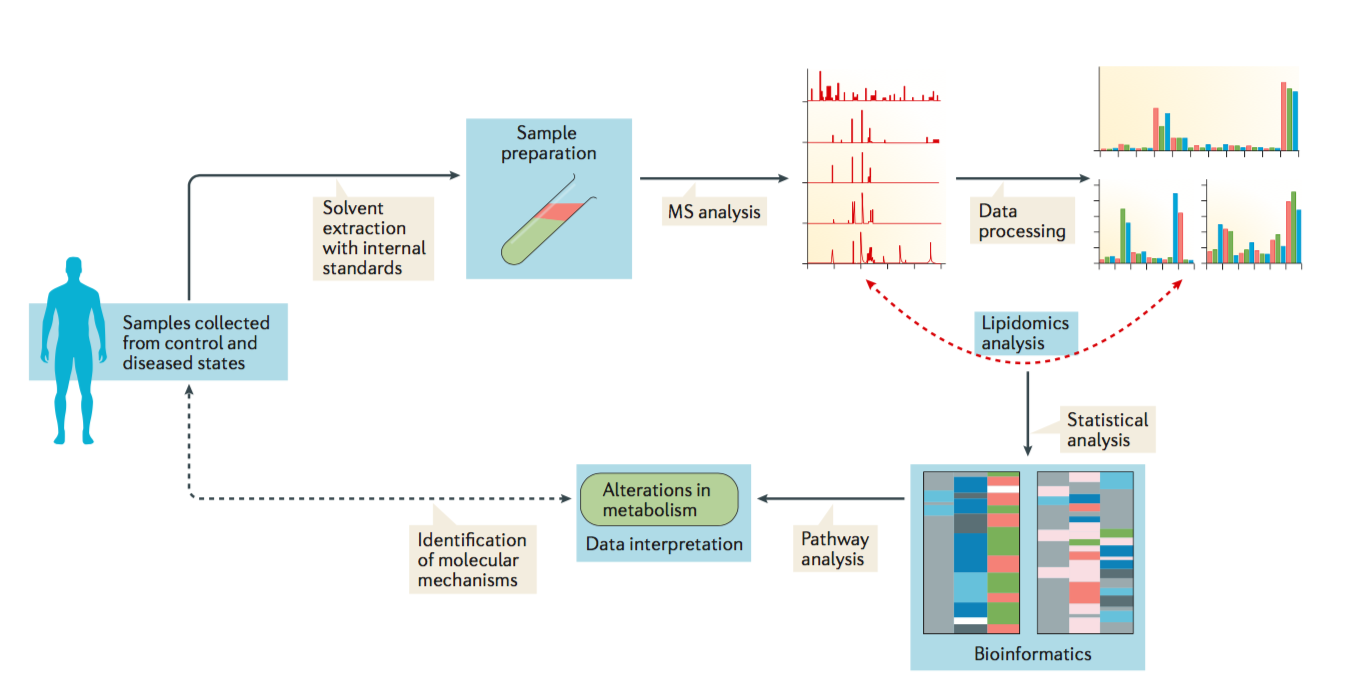 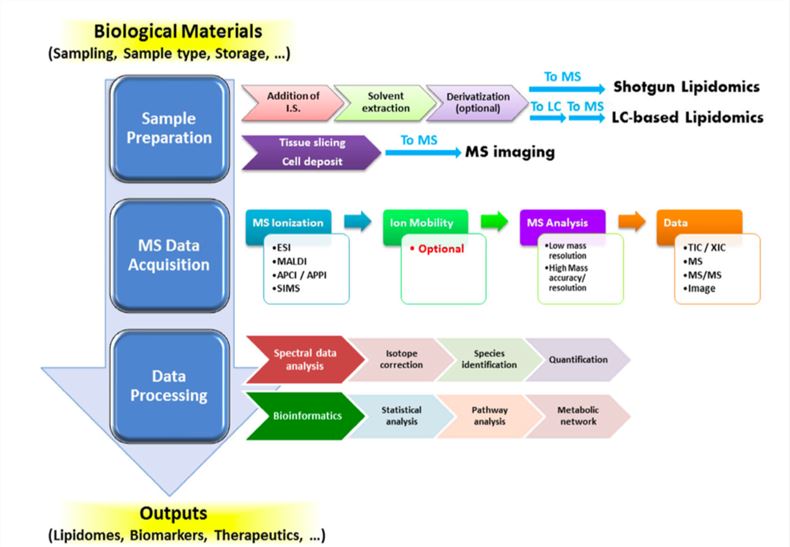 The first and most vital step in sample processing is the sampling itself. If samples are not immediately processed or flash frozen, many enzymatic and chemical processes will continue, eventually metabolizing the lipids. Therefore, it is highly advisable to process samples as quickly as possible, or, if this is not possible, to store them at least at −80 °C. Since lipids are generally prone to oxidization and hydrolysis, it is advisable to restrict the storage of samples to a period that is as short as possible, even at −80 °C.

This step becomes very important when working on tissue samples or cells. Homogenization ensures that lipids from all parts of a piece of tissue are equally accessible to extraction solvents.

The sample preparation technique most widely used in lipidomics is liquid–liquid extraction. The Folch protocol and the Bligh and Dyer protocol both rely on a ternary mixture of chloroform, methanol, and water.

Solid-phase extraction (SPE) is a very specific sample preparation technique used in lipidomics that yields highly enriched samples with little contamination. It can be a highly valuable method if only few precious samples need to be analyzed with a very high coverage of lipid species.

Derivatization serves four purposes in lipidomics: it can be used to (1) increase ionization efficiency, (2) introduce a selective fragment that can even be used in precursor ion or neutral loss scans, (3) mask functional groups (e.g., phosphates) that may stick to steel surfaces when they are transferred to the mass spectrometer, and (4) introduce an isotopic label for differential quantitation.

Although shot-gun lipidomics can answer many of the needs associated with sample lipid profiling, some workflows do require chromatographic separation before MS analysis. In these cases, Creative Proteomics would choose a column that is suitable for the separation of your lipids of interest and use ultrahigh-performance liquid/gas chromatography equipped with different mass spectrometry systems to analyze the lipidomics.

MALDI-imaging mass spectrometry (MALDI-IMS) is a two-dimensional MALDI-MS technique used to visualize the spatial distribution of biomolecules without extraction, purification, separation, or labeling of biological samples. This technique can reveal the distribution of hundreds of ion signals in a single measurement and also helps in understanding the cellular profile of the biological system. MALDI-IMS has already revealed the characteristic distribution of several kinds of lipids in various tissues. The versatility of MALDI-IMS has opened a new frontier in several fields, especially in lipidomics.

Mass-spectrometric lipidomic approaches generate large amounts of mass spectrometric data, which have to be analyzed by biostatistical methods. Guidelines for lipidomics studies were established and validated to standardize the corresponding lipidomic data, aiming at comparability of the results.