Sphingomyelin is mainly located on cell membranes, lipoproteins and other lipid-rich tissue structures. Sphingomyelin is very important for maintaining cell membrane structure, especially the micro-control function of the cell membrane (such as membrane invagination). It can regulate the activities of growth factor receptors and supercellular matrix proteins, and provide binding sites for some microorganisms, microbial toxins, and viruses. Many extracellular drugs and external stimuli such as tumor necrosis factor (TNFσ), interleukin (IL-1), gamma radiation, interferon (IFNγ), etc. can hydrolyze sphingomyelin and release ceramide by activating sphingomyelinase. Ceramide then continues to perform its physiological functions as a second messenger.

Sphingomyelin is also found in natural foods, and is most abundant in foods such as eggs, meat, fish and milk. Studies have shown that sphingomyelin has a potential inhibitory effect on colon cancer. In addition, sphingomyelin can also reduce serum cholesterol, improve skin barrier function and promote neurodevelopment in infants and young children, making sphingomyelin a potential functional food. 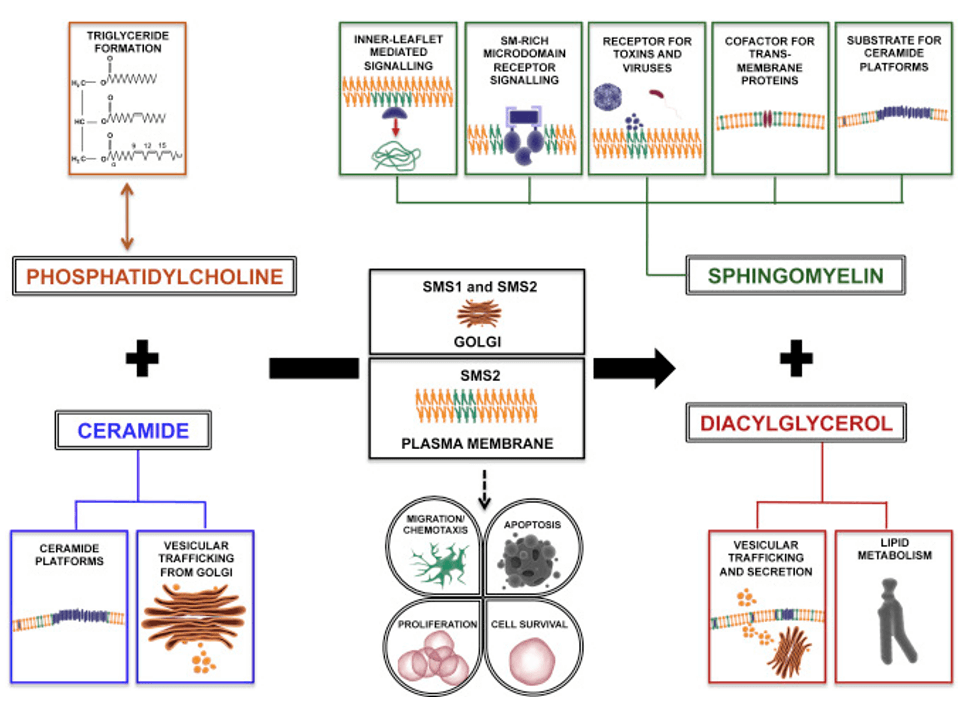 HPLC is the most commonly used method for the analysis and detection of sphingolipids, which can be divided into ultraviolet detector (UV), evaporative light scattering detector (ELSD), mass spectrometry and so on according to different detectors.

The evaporative light scattering detector is a general-purpose detector capable of analyzing any compound with volatility lower than that of the mobile phase. Its detection does not depend on the optical properties of the sample and is not affected by functional groups, making it suitable for the detection of components with no or weak UV absorption.

UV detector is a detector designed based on the principle that solute molecules absorb UV light, and is used to analyze substances with UV absorption, such as those containing unsaturated structures such as carbonyl, carboxyl, amino, and carbon-carbon double bonds. Phospholipids have UV absorption at 200 nm~210 nm. This method can achieve better separation of SM, phosphatidylcholine, etc, but is influenced by the mobile phase, which is prone to baseline drift, and it requires a certain degree of similarity between the structure of the standard and the sample, which limits the application of the method.

Direct injection electrospray tandem mass spectrometry is one of the strategies of birdshot lipidomics research, in which samples without chromatographic separation are injected directly into the mass spectrometer through a flow injection pump. The sample is characterized and quantified using the neutral loss scan (NLS) and the parent ion scan (PIS) of the tandem triple quadrupole mass spectrometry. This method is sensitive, fast and without chromatographic separation, and is widely used for lipid analysis.