Metabolism and Detection of Sphingosine-1-Phosphate

Metabolism and Detection of Sphingosine-1-Phosphate

Sphingosine-1-phosphate (S1P) is a bioactive lipid produced by sphingolipid metabolism and is involved in a variety of basic cellular functions, such as cell proliferation, migration, survival, and intercellular signaling. S1P can be produced intracellularly by sphingosine catalyzed by specific sphingosine kinase (SphK), but can also be catabolized by S1P phosphatase or S1P lyase (S1PL), thus ensuring the dynamic balance of S1P in the human physiological environment. S1P can act as a second messenger directly on intracellular targets, or can be transported extracellularly by transporter proteins to bind to the corresponding receptors (S1PR) and exert biological effects. Unlike ceramide and sphingomyelin, it stimulates cell growth and inhibits apoptosis. The three constitute an important metabolic equilibrium called the "sphingomyelin rheostat".

The degradation of S1P is mediated by 2 different enzymes. S1P lyase (SPL) located in the endoplasmic reticulum irreversibly cleaves S1P in the cytoplasm to produce phosphoethanolamine and hexadecene. In addition to cleavage by S1P lyase, S1P can also be degraded by lipid phosphatase-mediated dephosphorylation. 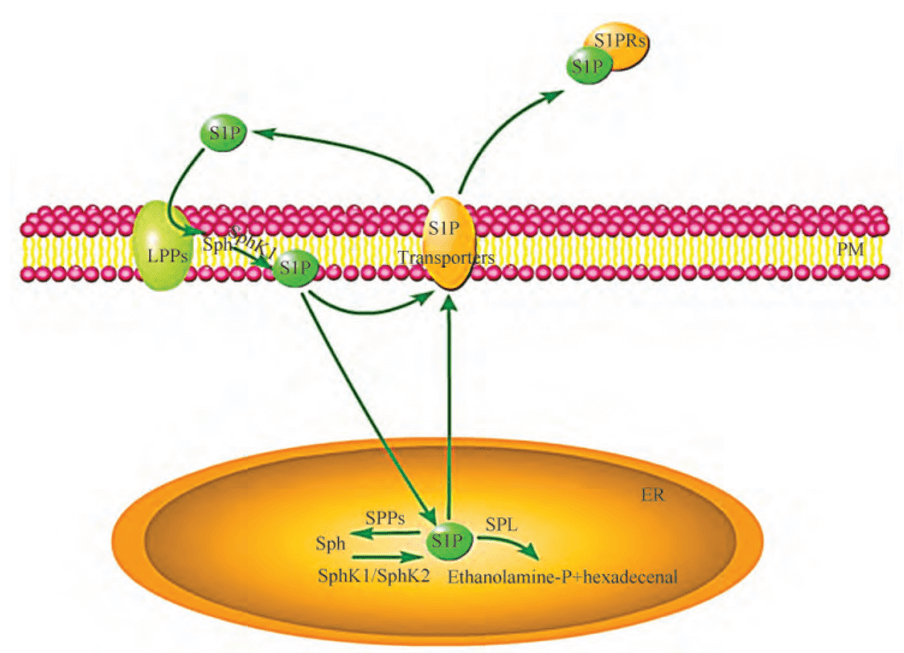 S1P is separated by methanol precipitation combined with ultrasonic extraction, and the supernatant is quantified by liquid-mass spectrometry in selective ion monitoring mode after high-speed centrifugation to remove large particles.

Creative Proteomics provides qualitative and quantitative analysis of sphingosine 1-phosphate for customers in the pharmaceutical, food and bioscience industries based on an LC-MS/MS technology platform.