Functions of Gangliosides and Association with Brain Diseases

Functions of Gangliosides and Association with Brain Diseases

Gangliosides are a group of acidic sphingolipids that are mainly distributed in the vertebrate nervous system, abundant in the brain and widely expressed in various tissues and organs. Its structure is mainly divided into two parts: hydrophilic oligosaccharide chains and hydrophobic ceramide. There is often a certain structural diversity among different types of gangliosides, which is mainly conferred by their oligosaccharide chains rather than ceramide. Most gangliosides belong to the ganglio-group of core glycan chains, while some belong to the lacto-, neolacto-, globo- and isoglobo-group. 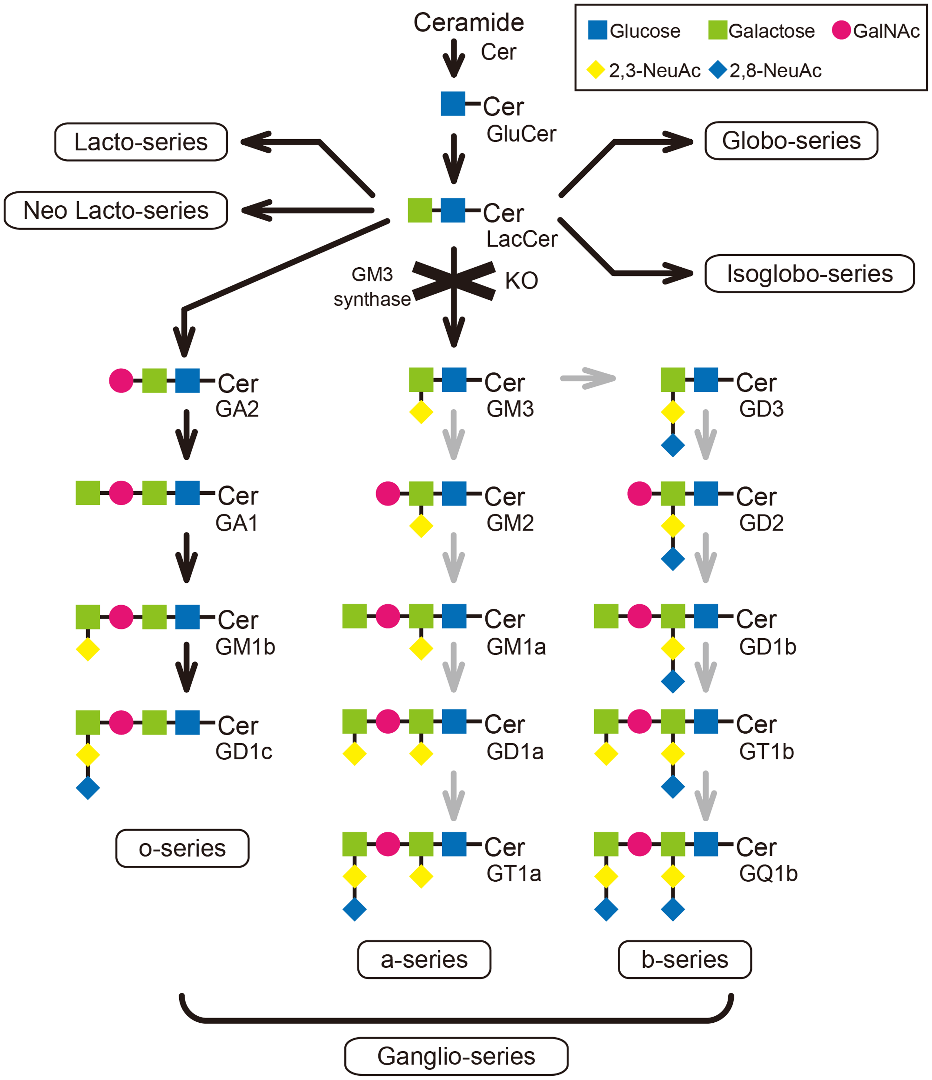 Gangliosides are one of the key molecules in the cytosolic membrane affecting cell adhesion, transfer and signaling, acting as both mediators of cell adhesion and regulators of signal transduction, as well as microbial toxin receptors and immune antigens. Gangliosides are often enriched on top of the outer leaflet of the cell membrane, with the head of the hydrophilic sugar chain extending extracellularly and anchored to the cytosol by the hydrophobic ceramide tail. Gangliosides are not normally found alone in the cytosolic membrane, but interact with other components such as sphingomyelin, cholesterol and transmembrane proteins to form a microdomain and lipid raft structure. In addition, the sialic acid residues on the glycoconjugate structure of gangliosides are a major carrier of their biological functions.

In the brain and nervous system, gangliosides have even more diverse and important physiological functions. Gangliosides significantly contribute to brain development and cognitive development in offspring, mainly by regulating the growth of nerve cells, the formation of myelin sheaths and synapses, and by influencing neural message transmission. The hippocampus, which is responsible for establishing complex cognitive functions and memory-related functions, has a large presence of gangliosides. During the development of different brain diseases, the content and type of gangliosides in various regions of the brain, including the hippocampus, are significantly altered, which in turn has a significant impact on the relevant physiological functions.

Brain tumors typically overexpress two series of complex gangliosides, b- and c-, that are only highly expressed in normal neural tissue. Some modified simple gangliosides such as N-acetyl GM3 and N-hydroxyacetyl GM3 are also relevant antigens expressed in tumor tissues. These newly expressed complex gangliosides play a key role in the invasion and metastasis of neuroectodermal tumors. The effects of gangliosides on tumors are two-sided, enhancing the adhesion and migration of tumor cells on the one hand, and resisting tumor growth through different signaling pathways on the other.

The metabolism of gangliosides is significantly altered in specific brain regions of patients with some neurodegenerative diseases, further leading to altered physicochemical properties of the membrane structural domains/lipid rafts enriched in gangliosides, which can affect neurodegenerative disease progression. Altered interactions between glycosphingolipids (especially gangliosides) in lipid rafts and with membrane proteins may lead to aggregation and misfolding of disease-associated proteins, such as α-synuclein (αS) in Parkinson's disease and Huntington's protein in Huntington's disease (HD).