Function and Detection of Leukotrienes

Function and Detection of Leukotrienes

Leukotrienes are a class of highly biologically active inflammatory mediators, which are eicosanoid unsaturated acids with a conjugated triene structure obtained from the lipoxygen metabolism of arachidonic acid. They are classified into six categories according to the nature of their substituents. Leukotrienes C4 (LTC4), leukotriene D4 (LTD4), and leukotriene E4 (LTE4) are also known as cysteinyl leukotrienes (CysLTs) because they contain cysteinyl groups on C-6.

Leukotrienes are a class of highly biologically active inflammatory mediators with high physiological activity despite their minimal levels in the body. Leukotriene B4 (LTB4) is an important leukocyte activator that stimulates leukocyte chemotaxis, aggregation, and the release of oxygen radicals and lysosomal enzymes, increases vascular wall permeability, and stimulates bronchial mucus secretion. LTC4 and LTD4 increase airway resistance and vascular permeability, but have little effect on nasal itching and sneezing, and are less capable of inducing nasal overflow than histamine. CysLTs improve the activity of neural pathways associated with the airway and significantly enhance smooth muscle contractile responses to blood vessels. LTD4 enhances histamine-induced bronchoconstriction and is also a potent kinin and neuropeptide inducer. 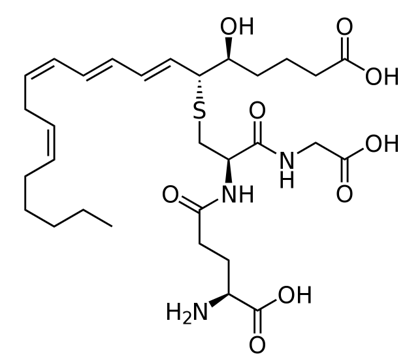 The level of LTB4 or LTC4 in the specimen can be determined by double antibody sandwich enzyme immunoassay. Urinary LTE4 is measured using a competitive inhibition method. Urinary LTE4 measurement is a sensitive and non-invasive method that uses urinary LTE4 concentration as a predictor of susceptibility with leukotriene receptor antagonists for the observation of asthma efficacy and determination of prognostic potential.

Liquid chromatography with tandem mass spectrometry is a powerful analytical technique that combines the separation capabilities of liquid chromatography with the high sensitivity and selective mass analysis capabilities of triple quadrupole mass spectrometry. A sample solution containing the target analytes is pumped through a stationary phase (LC column) by a mobile phase flowing under high pressure. The method has the advantages of high sensitivity, low detection limit, low sample usage, high throughput, and fast detection speed.