Function and Detection Methods of Prostaglandins

Function and Detection Methods of Prostaglandins

Prostaglandins (PGs) are unsaturated fatty acids synthesized from arachidonic acid in the human body. According to their structure, PGs are classified into types A, B, C, D, E, F, G, H, and I. The vast majority of renal PGs are produced by interstitial cells and collecting duct cells in the papillae of the renal medulla. The human seminal vesicles, lungs, kidneys, brain, and gastrointestinal tissues, and other cells throughout the body can secrete PGs in almost all tissues. 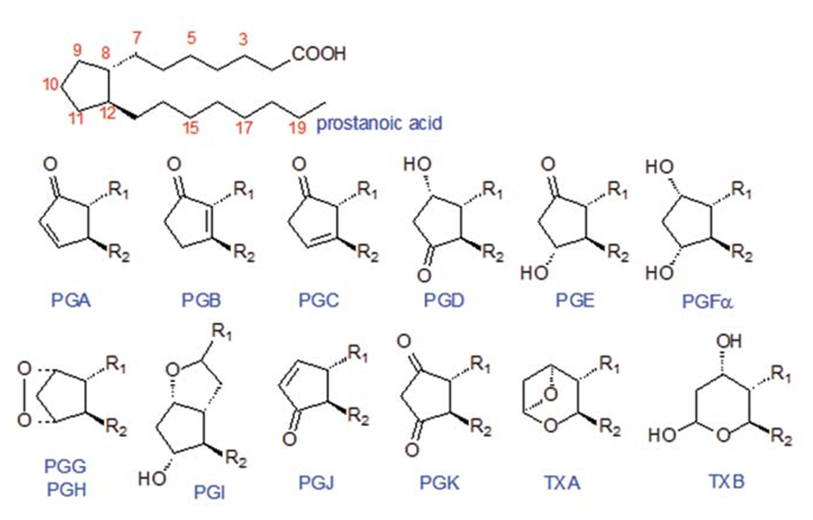 (3) Effects on the gastrointestinal tract

(4) Effects on the nervous system

PGs are widely distributed in the nervous system and play a regulatory role in the release and activity of neurotransmitters. It is also believed that PGs themselves have neurotransmitter effects.

(5) Effects on the respiratory system.

Prostaglandin E has a relaxing effect on bronchial smooth muscle, while prostaglandin F, on the contrary, is a bronchoconstrictor.

(6) Effects on the endocrine system.

PGs affect the synthesis and release of hormones by influencing the high and low levels of cyclic adenosine monophosphate (CAMP) in endocrine cells. For example, it induces thyroxine secretion and adrenocorticotropic hormone synthesis. It also reduces hormone action by decreasing CAMP levels in target organs.

Immunoassays have low specificity and are not suitable for the simultaneous analysis of multiple prostaglandins. HPLC-UV and GC/MS can provide higher sensitivity, but require derivatization to facilitate detection and improve sensitivity. In addition, LC-MS/MS allows for rapid and sensitive simultaneous analysis and quantification of prostaglandins without derivatization.