Metabolism and Detection of Triacylglycerol

Metabolism and Detection of Triacylglycerol

Triacylglycerol (TG), also known as neutral fat, is composed of 3 molecules of fatty acids esterified with 1 molecule of glycerol and is the main source of energy in the body. TG is in the core of lipoproteins and is transported in the blood as lipoproteins. In addition to TG, diglycerides, monoglycerides (the sum of which is less than 3% of TG) and free glycerol (FG) are also present in peripheral blood. Of the various lipoproteins, celiac (CM), very low density lipoprotein (VLDL) and their residual TG content are high and are collectively referred to as TG-rich lipoproteins (TRL), also known as residual-like lipoproteins (RLP). A growing body of clinical and experimental evidence suggests that TRL plays an important role in cardiovascular diseases such as atherosclerosis (AS).

The metabolism of TG can be divided into two pathways, exogenous and endogenous.

Exogenous pathway: TG in food is hydrolyzed into fatty acids and mono- and di-glycerides in the small intestine and then absorbed into the cells by the intestinal mucosa before synthesized into TG and formed CM with other lipids, which enters the blood through the lymphatic system. TG in CM is hydrolyzed into glycerol and free fatty acids (FFA) by the action of lipoprotein lipase (LPL) and used or stored by the cells. CM-associated TG in the blood peaks 3-6 h after a high-fat diet, and the rate of fat absorption varies depending on the composition of fat in food and individual differences.

Endogenous metabolic pathway: CM hydrolysis products-CM residues are taken up by the liver in a receptor-mediated form, and its derivatives and some new components are synthesized into VLDL. Similar to CM hydrolysis, VLDL is secreted into the blood and hydrolyzed by LPL into residual particles, some of which are directly absorbed and broken down by the liver, while the other part continues to be hydrolyzed to form intermediate density lipoprotein (IDL) and finally LDL is produced. The synthesis and hydrolysis of VLDL are regulated by various factors, including substrate utilization, hormone status, hydrolase activity and the activity of some specific apolipoprotein cofactors. 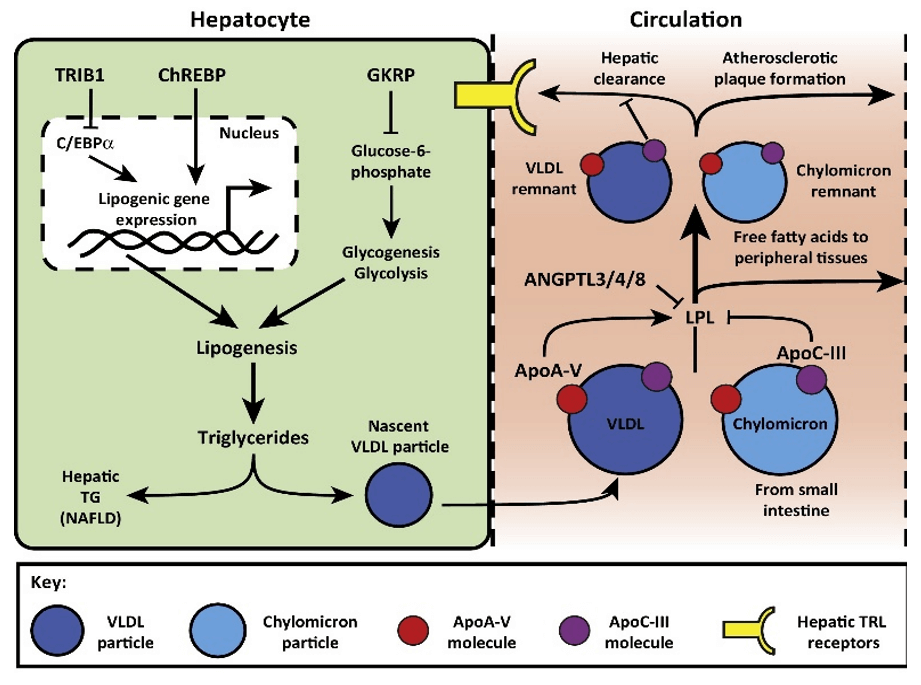 In general, TG can be determined by chemical, enzymatic, and mass spectrometry-based analytical methods.

The chemical method uses organic solvents to extract TG from the specimens. After removing interfering substances such as phospholipids from the extract, TG is hydrolyzed with alkali. Periodic acid oxidizes glycerin to generate formaldehyde, which is then measured by the color reaction. The accurate chemical method is the dichloromethane-silicic acid-chromogenic acid method (Van Handel-Carlson method). This method extracts completely, can remove the interference of phospholipids and glycerol, has high color sensitivity and stable color development. It is still an internal reference method of the US Centers for Disease Control and Prevention (CDC). However, there are many operating steps and high technical requirements, which are not suitable for routine work applications.

Enzymatic assays for serum TG levels are commonly used in clinical laboratories. They generally involve 3 basic steps: hydrolysis of TG with the most appropriate LPL to produce glycerol and FFA, followed by conversion. Usually, only one enzyme, such as glycerol kinase, is used to phosphorylate the glycerol for the next step of the reaction, or to generate the intermediate to be tested. Finally, a colored dye (often quinoneimine, etc.) or UV-absorbing substance is formed and the corresponding TG concentration is then calculated spectrophotometrically. This method is simple, rapid, microscopic, specific and has a wide linear range.