What are plant sterols?

Plant sterols belong to sterols with plant active ingredients, which are important components of plant cells. Its molecule contains 28-29 carbon atoms, and the hydroxyl group at the C-3 position is an important active group, which can be combined with carboxylic acid to form plant sterol ester and has better lipid solubility and biological activity than sterol.

β-sitosterol can inhibit superoxide anion and scavenge hydroxyl radical. Adding 0.08% plant sterol in oil and grease can minimize the oxidation of oil and grease. Its antioxidant ability increases with the increase in concentration, especially when combined with vitamin E or other antioxidant drugs, the antioxidant effect can be synergistic to produce a stronger superimposed effect.

The role of plant sterol also includes its use (i) as a preventive agent of liver dysfunction; (ii) as an immunomodulatory factor, stimulating the proliferation of lymphocytes and T cells; (iii) inhibiting the occurrence and development of breast cancer, gastric cancer and intestinal cancer in the body; (iv) promoting the expression of human prostate stromal cell growth factor and enhancing the activity of protein kinase, etc.

Clinical medicine: β-sitosterol can be used to treat hypercholesterolemia and hypertriglyceridemia.

Drug synthesis: Plant sterols can be used to synthesize sterol hormones that regulate water, protein, sugar and salt metabolism, a feature that can be used to make almost all steroids such as hypertension drugs and oral contraceptives.

Healthy food: Plant sterols are widely used in food preparation as functional active ingredients for the prevention of cardiovascular diseases.

Livestock breeding: Adding plant sterols to the diet can improve the feed conversion efficiency of broiler, the production performance of weaned piglets and reduce the feed to meat ratio. Supplementation of a certain amount of plant sterols in prelactation cows can increase milk production and improve milk composition, so that milk fat rate, milk protein rate and non-fat solids can be increased, while body cell count and milk urea nitrogen content have different degrees of reduction. At the same time, it can balance energy and protein intake and improve the milk production performance of dairy cows. 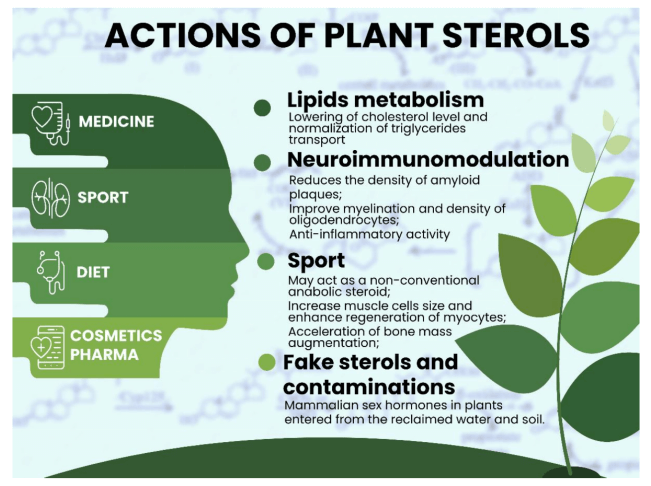