The sphingolipid consists of a glycan structure attached to a lipid tail containing a sphingolipid ceramide. The ceramide consists of sphingosine containing 14C to 20C and an aliphatic chain attached to the sphingosine amino group by an amide bond, which varies in length from 16C to 26C. The degree of unsaturation of sphingomyelin often varies depending on the diversity of its species origin, the tissue site where it is present, and the physiological state in which it is found. The glycosphingolipid's sugar chain is partially linked to the primary hydroxyl group of ceramide by a glycosidic bond. As another important structure constituting glycosphingolipids, the sugar chains can be monosaccharides or polysaccharides and are much more complex than ceramides. Its main components are D-glucose, D-galactose, L-fucose, D-mannose, N-acetylglucosamine (GlcNAc), N-acetylgalactosamine (GalNAc) and sialic acid (SA). 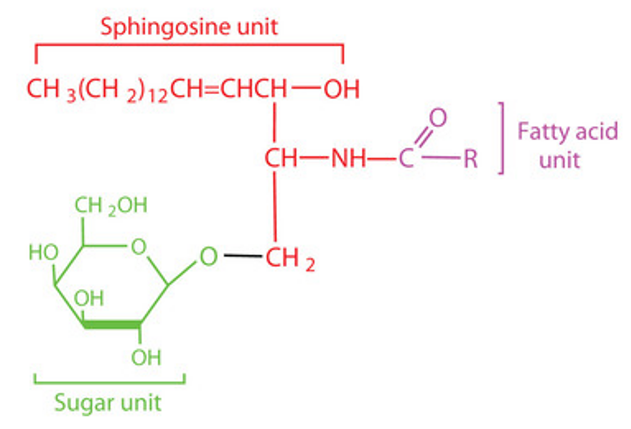 Glycosphingolipids are mainly distributed in the outer leaflets of the cytoplasmic membrane and the intracellular membrane of mammalian tissues. The special structure of the hydrophobic portion of glycosphingolipids allows them to be more stably embedded in the cell membrane bilayer, while the hydrophilic portion extends outside the cytoplasmic membrane to carry out a range of life activities.

After extraction of glycosphingolipids from tissue or cell samples, they can be purified using forward or reversed-phase columns and then analyzed by LC-ESI-MS/MS.

For the extraction of glycosphingolipid samples by forward chromatography LC-ESI-MS/MS, the sample cells or tissues are subjected to sonication in a certain ratio of chloroform, methanol, and water, or a certain ratio of isopropanol, hexane, and water to release the crude lipids. The saponification reaction is then performed in a weak alkaline environment to remove the glycerol glycolipids from the results. The glycosphingolipids are separated by extraction using chloroform, methanol or Folch's method and ready for LC-ESI-MS/MS study.

The enzymatic reaction uses ceramide polysaccharide endonuclease, an enzyme derived from specific invertebrate animals and bacteria that breaks the glycosidic bond connecting the ceramide to the polysaccharide, releasing the sugar chain.

Chemical digestion releases the polysaccharide by passing the glycosphingolipid through ozonation, or osmium-catalyzed oxidation of periodate to break the C-C bond of sphingosine, followed by a beta-elimination reaction with alkali treatment.