Applications of Lipidomics in Nutrition and Health

Applications of Lipidomics in Nutrition and Health

Lipids can influence lipid metabolic pathways in the body. Objective and accurate identification of potential lipid biomarkers in the process from health to disease progression, so as to develop dietary guidelines for disease prevention and health maintenance, is of great importance to promoting human health.

LDL-C/HDL-C, total cholesterol and triglyceride levels are indicators for monitoring cardiovascular diseases. PUFA, especially w-3 PUFA, has the effect of lowering serum cholesterol and triglycerides, inhibiting LDL-C synthesis and increasing HDL-C levels. In turn, HDL-C maintains endothelial vascular reactivity, inhibits endothelial cell apoptosis, improves resistance to oxidative stress, and reduces the expression of adhesion factor-related genes in blood vessels and arteries. In addition, in studies related to Alzheimer's disease, docosahexaenoic acid (DHA) content in brain tissue was found to be significantly reduced, and the ability of patients' liver to synthesize DHA was also affected. w-3 PUFA can alter the composition of cell membrane phospholipids, interrupt the efficacy of lipid rafts to achieve anti-inflammatory effects, and inhibit the signal transduction of nuclear transcription factors-such as κB, reduce the expression of inflammatory genes, and promote the expression of the anti-inflammatory transcription factor NR1C3 and the binding of G proteins to GPR120 receptors.

Lipidomics applied to the nutritional study of plant sterols

Phytosterols have anti-inflammatory, metabolic, prostate disease prevention, and anti-cancer effects. The exact mechanism by which it reduces LDL-C in the blood is not known. It has been speculated that the competition between plant sterols and cholesterol inhibits the absorption of cholesterol in the human body, and plant sterols and cholesterol must be dissolved into particle clusters before they can be absorbed by the body.

With the development of lipidomics, lipid molecules have become important biomarkers. For example, plasma levels of triglycerides, short-chain fatty acids, free fatty acids, ceramides, and phosphatidylcholine are elevated in patients with hyperlipidemia, while levels of lysolecithin (LPC) (16:0) are decreased. The decrease in LPC (16:0) is consistent with its modulation by peroxisome proliferator-activated receptor α. Free fatty acids are associated with endothelium-dependent nitric oxide production and nuclear factor κB signaling activity. Ceramides control nutrient uptake and anabolism in tissues. The high sensitivity of molecular changes in lipids facilitates early diagnosis and effective prevention.

Lipids have an important role in cellular signal transduction and tissue physiology studies. Lipids in the brain determine the location and function of protein distribution in cell membranes and therefore can influence synaptic fluxes in neurons. Disturbances in lipid metabolism are closely associated with many neurological disorders, including schizophrenia and neurodegenerative diseases such as Alzheimer's disease, Parkinson's syndrome, and Niemann-Pick disease. 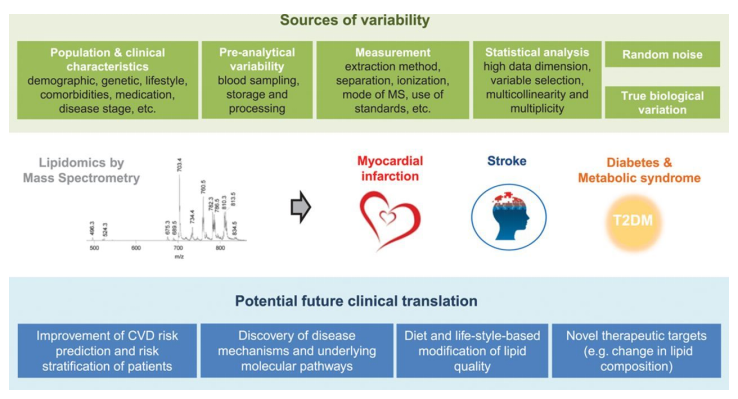 Gas chromatography (GC) is commonly used to analyze the composition of small molecular weight lipids such as fatty acids. The availability of high-temperature GC stationary phases has made it possible to analyze high boiling point compounds by GC. However, high temperatures have a destructive effect on lipids with relatively high unsaturates, making them unsuitable for the analysis of lipids containing long-chain polyunsaturated fatty acids. GC is also effective in separating fatty acid isomers and cis-trans structures of unsaturated fatty acid double bonds, and full two-dimensional gas chromatography coupled in series with gas chromatography of different polarities is an effective method for the analysis of polyunsaturated long-chain fatty acids.